College quarterbacks most likely to be NFL stars

The 2019 NFL draft is still far off, but when it comes to the top college quarterbacks, it’s worth touting that event even this early on.

Signal-callers who shine on Saturdays boost their chances of surfacing on NFL radars. The landscape is always shifting, too. Baker Mayfield wasn’t getting any hype as a first-round pick at this time in 2017. On draft day, he went first overall, and his clout is already influencing the Cleveland Browns in a big way.

Below is a ranking of the college quarterbacks who have the most upside to be an NFL franchise player, featuring draft-eligible prospects only. 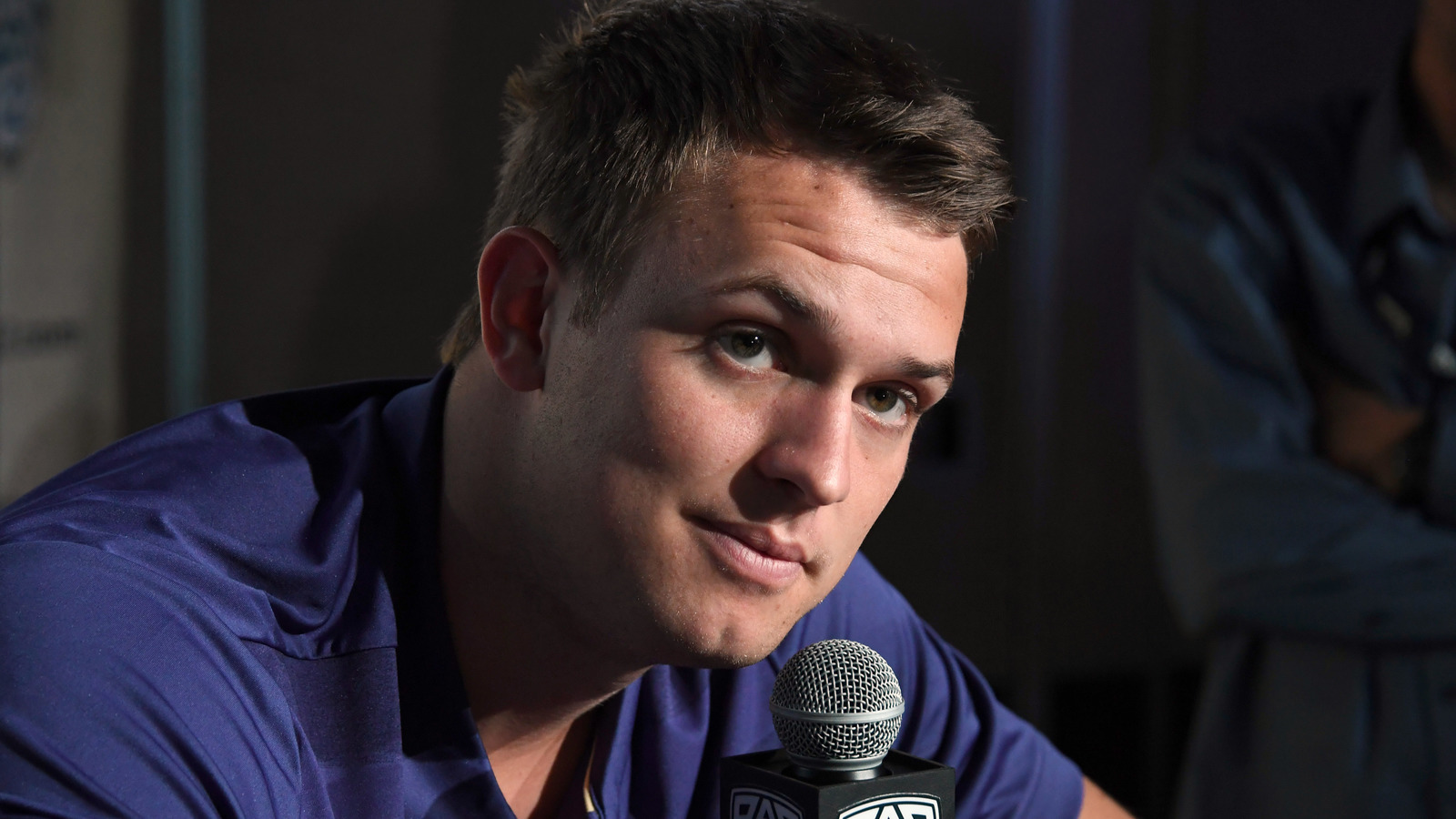 A massive drop in production from 2016 to last season (43 to 19 touchdown passes) won’t stop Browning from generating buzz as an NFL prospect.

The three-year Huskies starter took the reins as a freshman and hasn’t looked back. He’s guided Washington to a playoff appearance, averaged over 3,000 yards per season with a 64.4 percent completion rate and averaged 8.3 yards per attempt.

Jake Browning returns as the Pac-12's leader in passer rating from a clean pocket pic.twitter.com/PrfpqcjOlo

Browning lacks top-flight arm strength but has numbers that don’t suggest a dink-and-dunk, game-managing passer. If he can bulk up a little from 6-foot-2, 210 pounds and add higher velocity to his arsenal, his chances of being an NFL star will skyrocket. 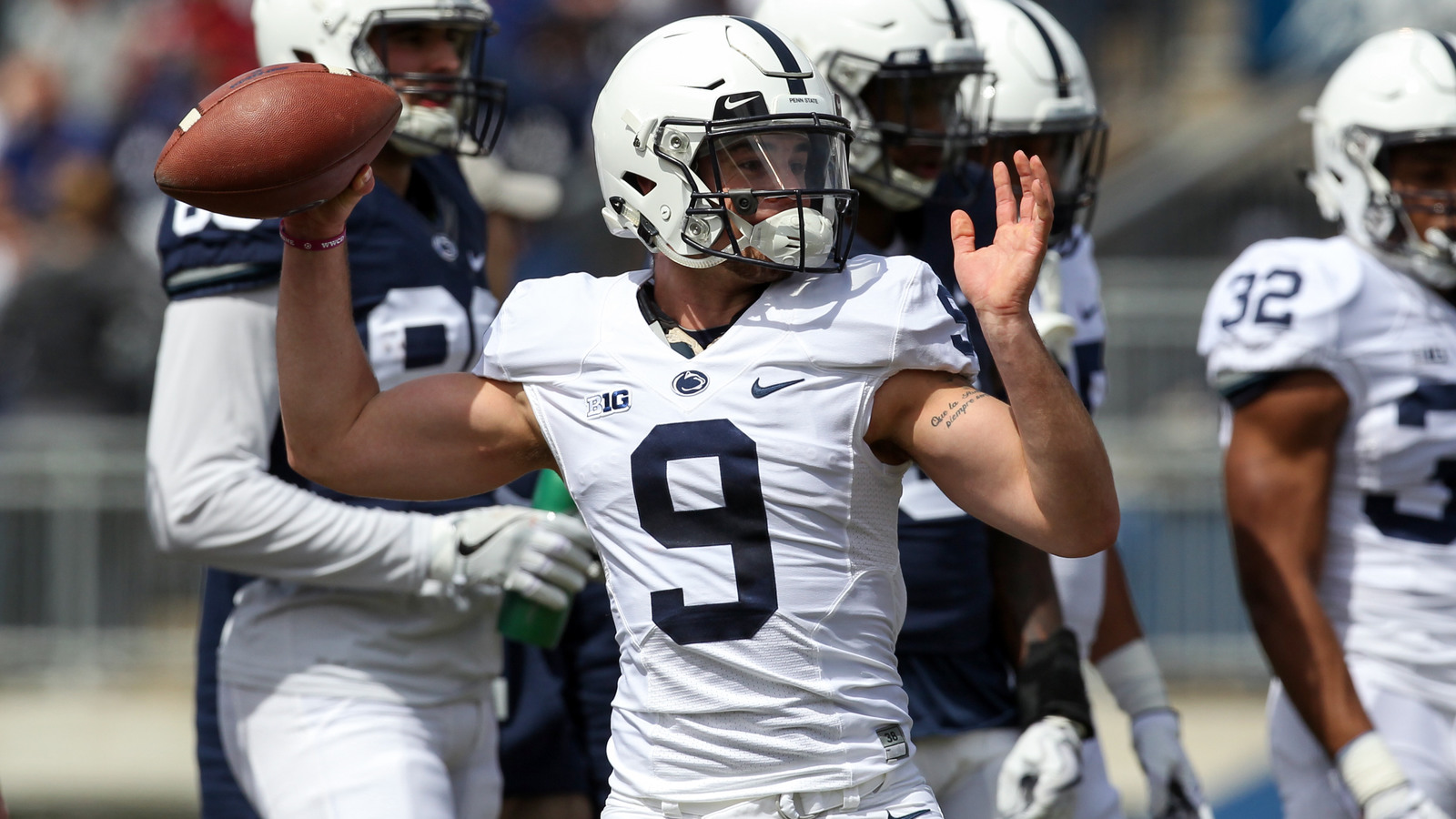 Saquon Barkley led the Nittany Lions offense in years past and should already be considered among the NFL’s elite playmakers. Now it’s the senior McSorley’s turn to run the show.

McSorley is slight of frame at 6-foot, 202 pounds. Similar size didn’t stop Mayfield from being drafted first overall, and McSorley has reminiscent intangibles of leadership and competitive fire needed to thrive in the NFL.

It’s important to note McSorley isn’t as advanced a passer as the reigning Heisman Trophy winner. That said, he can extend plays with his feet and showed vastly improved accuracy (57.9 to 66.5 completion percentage) between the past two seasons.

If he guides Penn State to the College Football Playoff, McSorley will be impossible to ignore. 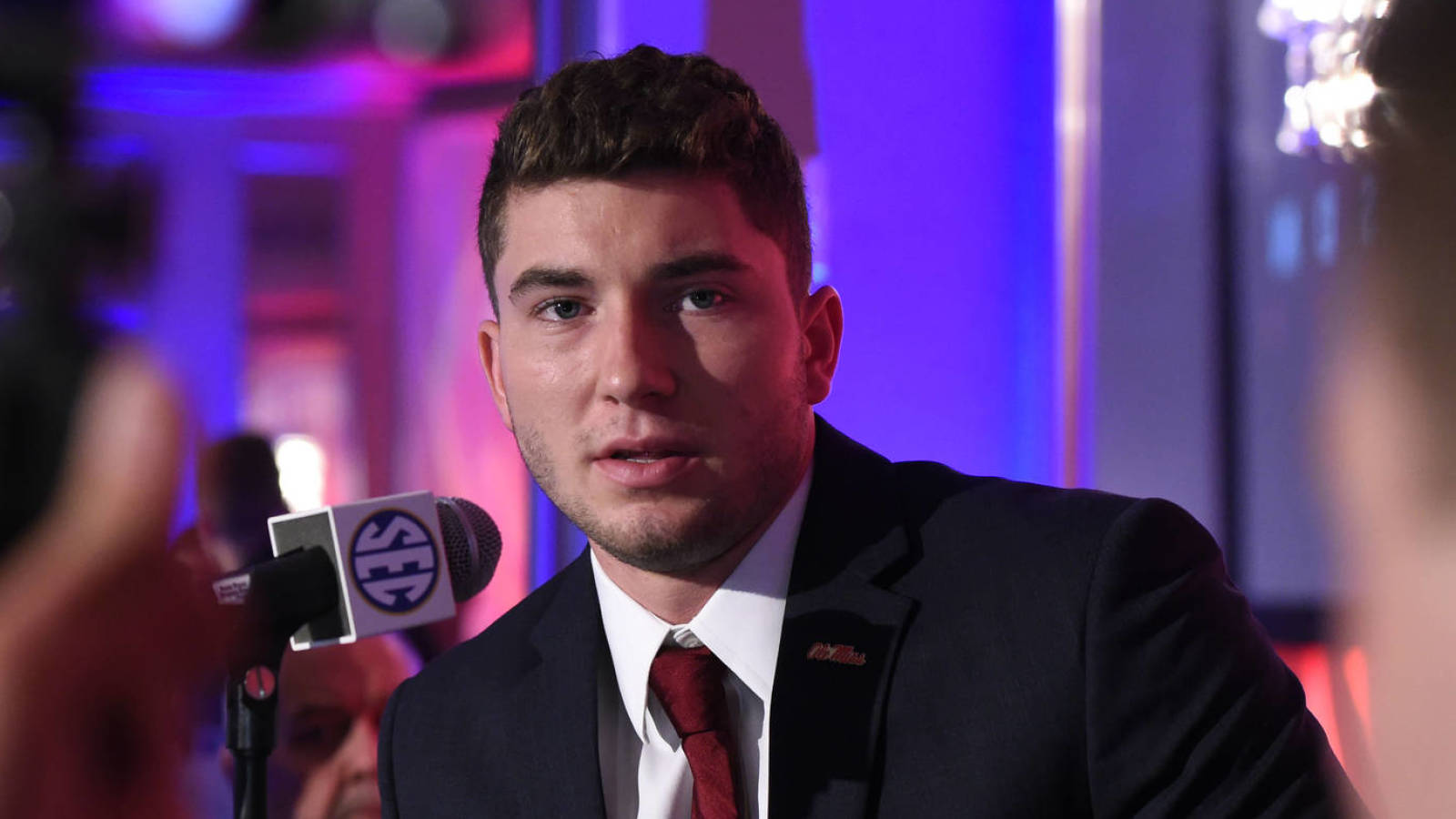 Transferring from Ole Miss was a great move, because Patterson was immediately eligible and won the Wolverines’ starting quarterback job.

To say Michigan is getting an upgrade at the most important position is an understatement, as this ESPN Stats & Info graphic illustrates:

Patterson is akin to Johnny Manziel: undersized (6-foot-2, 205 lbs) but with plenty of arm talent, a quick release and an ability to make plays off schedule. That can come in handy as he adjusts to the pros.

Unlike Manziel, whose NFL failure was triggered by off-field issues, Patterson doesn’t come with baggage. He’s also learning under a proven NFL coach in Jim Harbaugh, whose quarterbacks at Michigan haven’t been near Patterson’s caliber.

Under Harbaugh’s tutelage in 2018, Patterson could work his way into the first-round conversation. 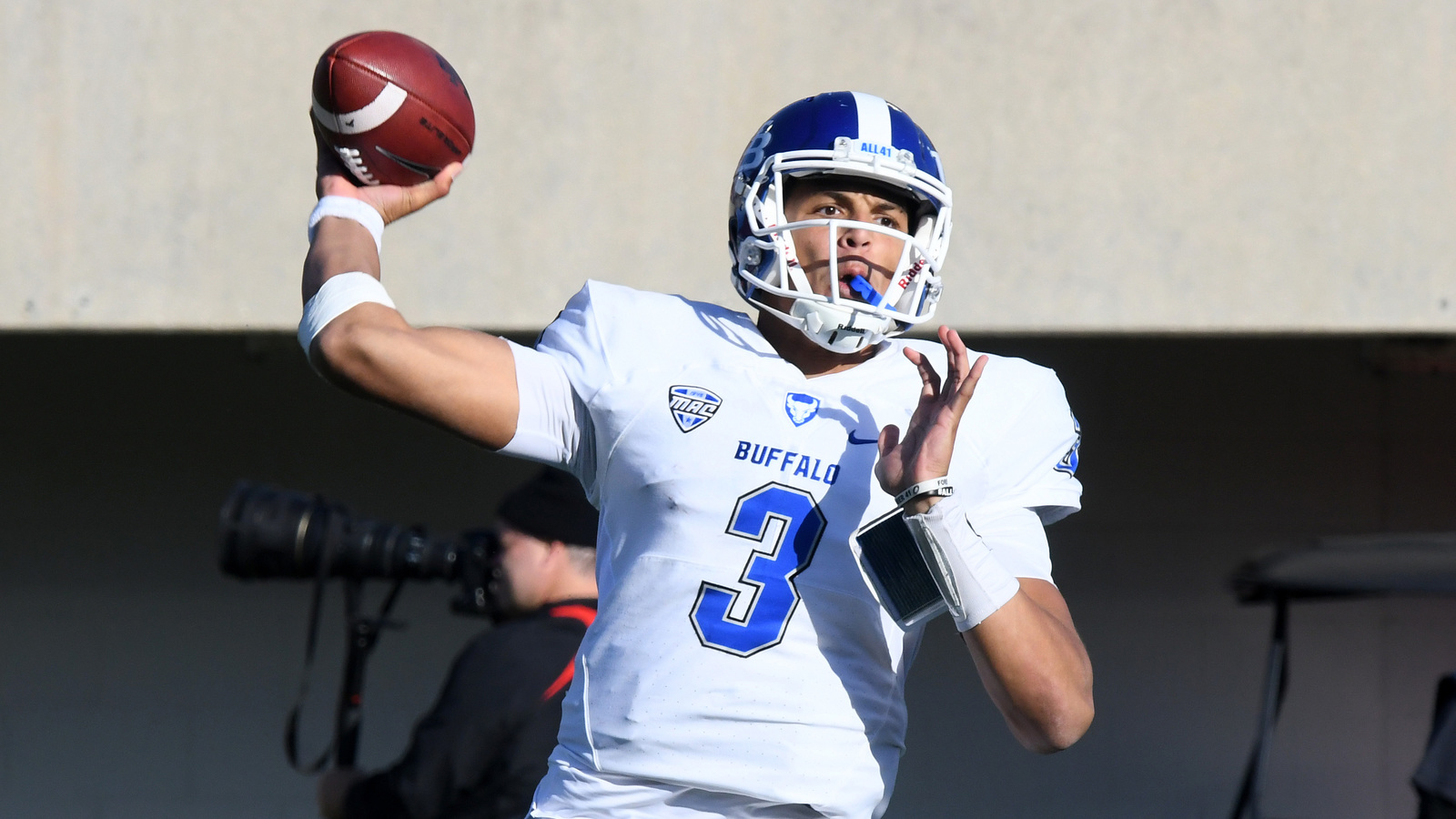 At 6-foot-7, 245 pounds, Jackson has the chance to become the next high-profile player from Buffalo. The program produced a legitimate superstar in Khalil Mack, but Jackson gives NFL scouts another reason to tune in to some Bulls MACtion this season.

Is he the Josh Allen of this QB class??https://t.co/PfOpn0bAJR

Jackson’s physical tools are obvious. He’s one of those prospects who could easily become a better pro than college player. Helping his cause again this year is the presence of receiver Anthony Johnson, who’s among the game’s most unstoppable playmakers.

If Jackson can get the ball to Johnson often and distribute proficiently elsewhere when opponents double up on his go-to guy, he’ll soar up draft boards. 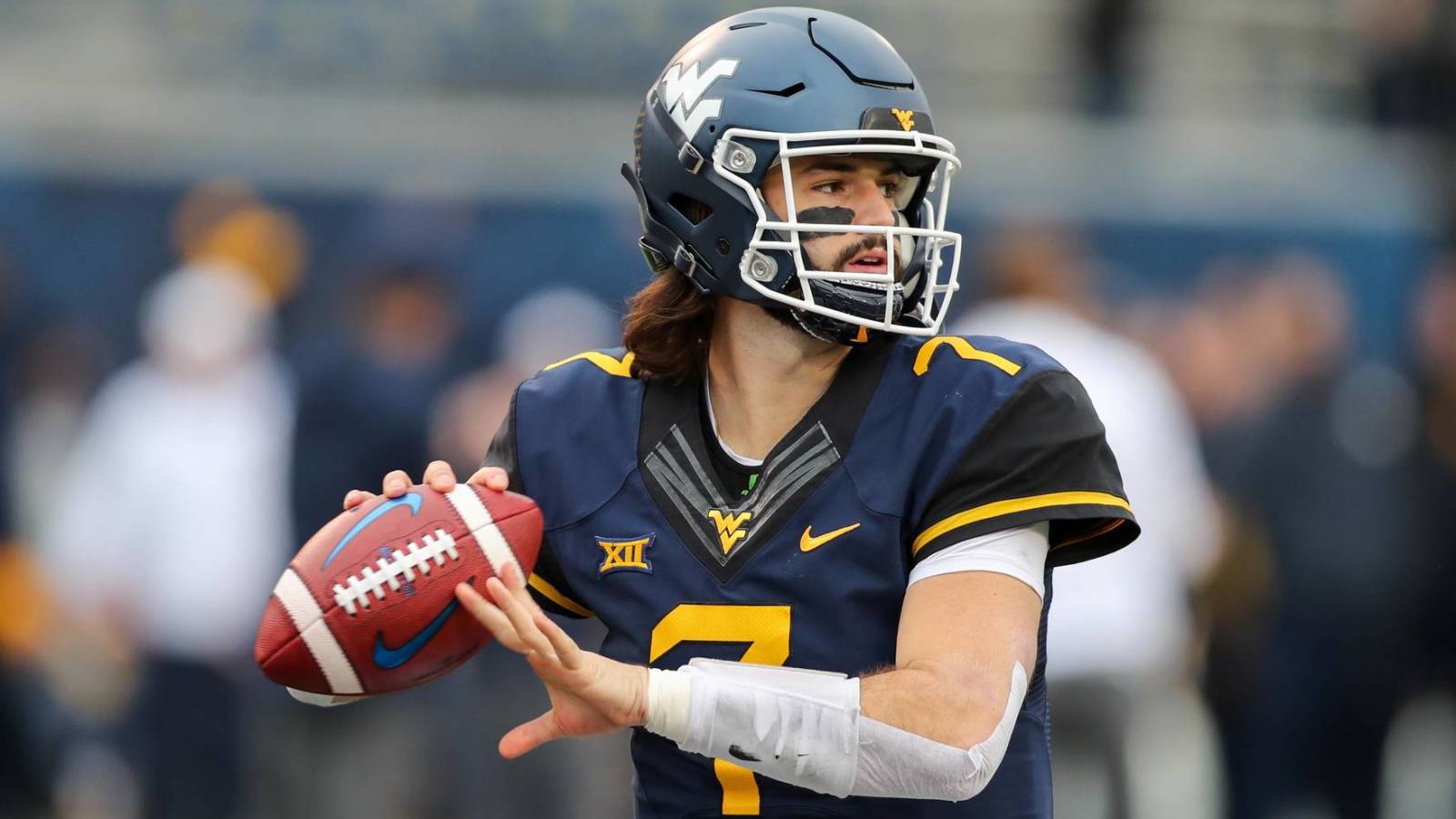 A performance-enhancing drugs suspension triggered Grier’s transfer to the Mountaineers from Florida. To his credit, Grier has made the most of his change in scenery, starting last year and throwing for 3,490 yards, 34 touchdowns and only 12 interceptions.

Based on his trajectory, ESPN named Grier to its preseason All-American team. From his recent comments posted by the WVU Football, it seems like Grier is comfortable leading a team with Big 12 championship expectations:

“A big part of being a leader is … making guys around you better … if somebody doesn’t know what to do, they should be able to look to you … you should be a model of what a West Virginia Football player is.” – Will Grier pic.twitter.com/XwyBoQ6dty

Grier is 6-foot-2, 223 pounds but is a little shorter than the NFL prototype. There’s no lack of zip on the ball, however, and his anticipatory throwing is advanced among the other quarterbacks. He’s more gifted as a passer — not as an athlete — than Patterson and McSorley.

West Virginia’s spread offense hasn’t produced many stellar pros of late, especially quarterbacks. It seems like Grier has the moxie and makeup to buck that trend.